In Love with a Forbidden Stranger 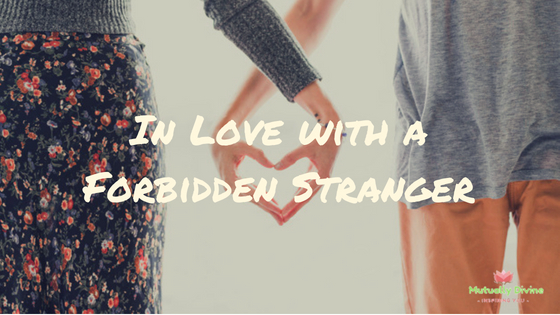 In Love with a Forbidden Stranger

It all started when this new boy joined our college. He was very good looking, and I was instantly attracted to him. I wanted to talk to him. I was sure he’ll be my friend. No boy has ever rejected me. I was tall, skinny, had a perfect face, light brown hair, and big brown doe-like eyes. I am the most popular girl in college, maybe this was because I’m the head cheerleader or daughter of a Mayor. That never affected me. All I know was I’m good at heart. So, I walked up to him and said “Hi there, can I help you with something”, just then Jess, my best friend, came by and dragged me away from him. “What are doing” she yelled angrily, “you better stay away from that boy”.

I observed him carefully as he walked to the door. I knew that time was running out but suppressed the urge to check my watch. I took a deep breath and started counting in reverse under my breath. “Ten, nine, eight, and seven…”

Ring…ring! Oh my God, my alarm just went off. I fell out of my bed and turned all around to check where he went, but then realized it was just a dream. I checked the time, it was just 4 a.m. I was so freaked out that I closed my eyes and went back to sleep.

I finally woke up with a startle. I’ve overslept today and was late for college. When I was getting into my Jimmy Choos, I heard mom yell “Vanessa, come down for breakfast.  And drop your brother to school today for me.” What? I screamed. Mom I’m already late.

I rushed into the kitchen. Mom was making toast and my favourite strawberry milkshake. As usual, my brother was on his cell phone. “Philips, will you stop playing and sit in the car. I’ll join you in five minutes.” I grabbed my toast and ran after him to the car.

I was just in time for the literature class. I spotted Jess and went straight for her. She smiled and went on with the book she was reading. I was staring at the door when he entered. My dream didn’t do justice to his face. He was more beautiful. Tall, bronzed skin, golden hair and those butterscotch eyes you couldn’t stop looking at. Today he was shining in a soft warm glow. Suddenly, he turned over and saw me while watching him and smiled. Jess broke my trance by nudging me and gave me a hard look. She told me, Ian’s reputation was not pleasant. There were plenty of stories about him. The most far-fetched and scary of them was that he once got arrested for bullying and harassing a girl. I wanted to stay away from him, but something in that boy drives me crazy, I can’t stop.

After the class, I decided to take a break from him and went to the canteen with Jess. Even so, we weren’t alone. He was sitting next to our usual table and was brooding over something. My heart skipped a beat. I wanted to run far away from that place but instead, grabbed a sandwich and took a big bite out of nervousness.  I choked. That very moment, an overwhelming voice enters my ears “Have some water, it’ll help you.” I looked up at him and shit it was Ian. I couldn’t stop staring at him. His big blue eyes met mine, and it was like a magic. I was lost when Jess prodded me. I took the glass of water he offered me. Though he was sitting next to me, I was embarrassed and couldn’t stop myself from looking in the opposite direction. While I was silently devouring my sandwich, I heard a whisper, audible only for my ears, “Please come to the party tomorrow” and then he added, “For me.”

I was exhilarated and looking forward to the party. I wish what if Jess was not there, and I could sit and talk with my only dream boy for hours. I couldn’t sleep that night at all. I dreamed again of him, going out of the door, leaving me alone.

I had an uneasy sleep and found that the weather was just like my mood. It was raining and miserable. I was in a very gloomy state and scared to face the party tonight. I wished the party was cancelled. I was wrong, I have been very unlucky lately, and knew I have no other choice. What will happen if Jess came to know that I went to the party with Ian? She’ll probably kill me, firstly for going and secondly, if I could die again, for cheating her.

While walking down the stairs my mom noticed me and asked, “What’s up with you? You look awful today.” Nothing mom it’s just the weather. It’s raining today, and you know I don’t like rains; I exclaimed and ran away to the car under my umbrella. I hope mom was satisfied with my answer. I didn’t want to get her suspicious about the party tonight. She may have second thoughts.

Just outside the parking lot, I saw Ian waiting for me. He was looking exceptionally attractive in his black leather jacket and tight black jeans. I got down from the car and joined him. Though the rain stopped, there was no change in my mood. “Good morning, you look upset”, though it wasn’t a question, but, I repeated the same answer, “it’s the weather. I don’t like the rains”. I’m not a good liar. It was easy to read my eyes. “Are you coming for the party? I’m looking forward to seeing you there” he asked. My insides were shouting loud to say no, instead I agreed. I was relieved with’ my answer when he gave me an electric smile in return. After that, he walked me to the class silently and didn’t say a word. Jess was standing outside the door and looked at me crossly. I ignored her and went to my seat.

My day at the school was a blur, except for the moments when I sneaked a peek at Ian and found him smiling at me. Time flew by, and I was on my way home. I was too nervous to lie down, so decided to read my all-time favourite Pride and Prejudice to cheer up. After finishing two chapters, (P.S.: I am a slow reader) I realized I was late and rushed to the shower, but had to slow down while doing my hair. I wanted to look my best today, so I went for my little black dress with thin straps that fitted by the body perfectly and ended just above the knees.

While dressing, I was still wondering why Ian invited me to the party, maybe he’s interested in me too.

As I entered the party, Ian was standing next to the door. He smiled, took my hand silently and guided me towards a group of kids sitting in a circle. We sat there for hours, just looking at each other. A boy, I think his name was Michael, beckoned Ian and asked to join him. He said he’ll come back soon and left me alone with his frat friends. Suddenly, a tall blonde guy offered me a beer. I refused, but he keeps on forcing me “Don’t be a spoiled sport, enjoy the party.” I took the glass of beer from him unwillingly, as I was not used to alcohol. Soon I started getting high. I saw Michael return, but Ian was not with him.  Michael said something to the blonde guy, and he looked at me and smiled a crooked smirk. I was petrified. Maybe it was just the beer; I thought. While I was in my thoughts, the blonde guy approached me and said, “Are you missing Ian, lemme take you to him.” He grabbed my hand and steered me towards a room. It looked vacant except for a big double bed in the middle of it and a dresser in the corner. I went inside looking for Ian, but he was nowhere to be seen. “Ian’s not here,” I enquired, but the guy didn’t answer my question. I turn around to check what was happening; I saw him closing the door behind me. I was very scared now and started screaming at him to leave me alone. He was approaching towards me when the door busted open, and Ian was standing there. I ran into his arms and cried. He gave me a glass of lemonade and took me outside. I was so drunk to even walk on my own.

“Why did you save me,” I asked while tears poured down my cheeks. He didn’t reply but, kept on looking at the sky. After a while, he said slowly with a sad smile on his face, “you have heard the rumours about me. I guess, and do you believe them?” I was unsure and speechless. He caught a fresh tear escaping my eyes and kissed it. I blushed. He said he was waiting for a reply, hesitantly I said, “I don’t know the truth.” So, a whole new story unveiled…..