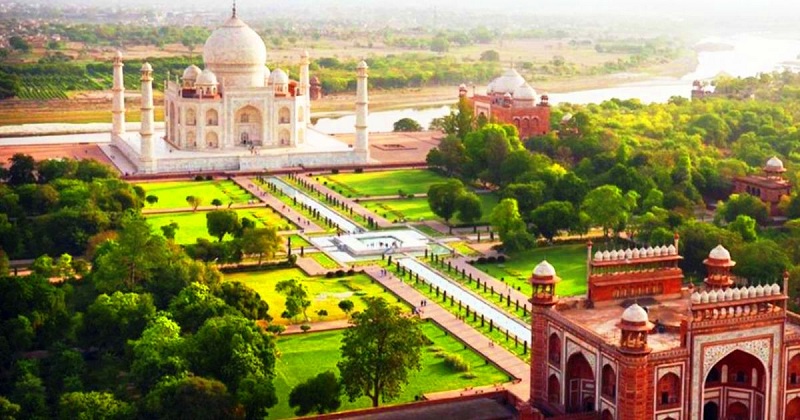 When I was in Delhi to Agra by car along with my friends, we all were excited about visiting the Taj Mahal very much. We all were very excited about it because it is a symbol of love made by a king for his beloved queen. The most important point is that he made it after she died. In present times, we more believe in showing the partners what we are doing for them. On the contrary, Shah Jahan is one of the most unique personalities in the world who chose to get more dedicated to his wife after she left the world. It is really a big deal to feel in today’s Times. It is the height of commitment. It is more special because it was made in 17 years or more. Therefore, showing love for a person who is no more in one’s life for more than a decade is really admirable. It was at the time when there were multiple marriages. Shah Jahan was in love with Mumtaz Mahal so deep. Before going to Taj Mahal we were mesmerized by the Taj Garden.

The first thing that I noticed was the raised Pathways that divide the four quarters of the garden into 16 sunken flower beds. Those flower beds were very systematically placed. It was very beautiful to look at.

There is a raised water tank made up of marble exactly in the centre of the garden. It covers the half way to reach the tomb and the Gateway. The best part about the water tank is, it has a reflecting pool. It has been accurately positioned on a North-South axis. One can see the reflection of the mausoleum. In Urdu, this water tank is called al hawed al-Kawthar which refers to the tank of abundance. This feature of reflecting pool is found in various Gardens, parks, and Memorial sites. Such pools are a little shallow. These are undisturbed by any kind of mountains objects so that they can serve the purpose of reflection.

At most of the places in the garden, there are avenues of trees which are labeled according to their names. The names may be scientific ones or the common ones.

The Taj Garden is called the Charbagh Garden because it is made accordingly. Charbagh Garden was introduced to India by Babur. These are quadrilateral Gardens, which are divided by walkways. They can be divided by flowing water canals also into 4 parts. If there are four flowing rivers in the garden, it represents the Paradise and the garden is believed to be a Paradise Garden. This is the Persian style of architecture. Please note that Babur was the first Mughal emperor in India. There was a very carefully thought and building everything in the Taj Mahal including the Garden outside. The entire measurement was made very beautifully and accurately. If you visit the garden it will really give you the feel of Paradise. The four rivers flowing from the central spring give a very soothing feeling.

The Creation of Paradise

The entire Taj Mahal has been created keeping in mind the creation of paradise. There is a mosque to give consistent peace to the soul of Mumtaz Mahal and there is a garden outside to give a feeling of aesthetic beauty. This garden is not enough. There is one more garden located opposite the Taj Mahal. This garden is Mehtab Bagh. It is the result of the philosophy of the Shah Jahan out of immense love for his wife who passed away at the age of 40. This is another point of appreciation. As of now, let me highlight the fact that Shah Jahan wanted to create a paradise for his wife who died that we generally believe in or pray for when someone dies. So, normal people only pray for but Shah Jahan actually did. This is awesome. This proves that he was so concerned about the pain that she went through while delivering their baby. Mumtaz Mahal passed away while delivering their 14th child at the age of 40.

It was really very different experience of being on Taj Mahal tour from Delhi. It has created a mindset which is full of optimism, belief in true love and genuine feelings. The Taj Mahal is a complete inspiration for future generations. As far as architecture is concerned, there is no comparison with the Taj Mahal. The precious stones, semi-precious stones, quality of marble, hard work, planning to the core and everything utilized in the construction of the Taj Mahal are completely amazing. For a normal mind, it is so easy to in fact, not imagining such a structure. It is a real wonder and the best example of creativity.

What Are You Looking For?